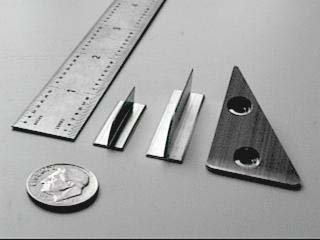 The vortex generators are custom built to your plane model by Micro Aero, in Anacortes, WA, from durable aircraft grade 6063-T6 aluminum, alodined to a Boeing mil-spec, and curved on the bottom for a perfect fit to your wing. In addition to the wings, vortex generators are also installed on vertical and horizontal stabilizer surfaces.

How do Micro VG’s work?

Air passing over the wing of a plane equipped with vortex generators will be spun into a small vortex, which helps it attach better to the wing surface, especially in high angle of attack situations. Air sticking to the wing longer, even at higher angles of attack, translate into better controllability and reduced stall speed. Stalls, when they do occur, will be more controlled and less violent.

A Cessna 402C benefits from an 11kt reduction in Vmca, from 80KIAS down to 69KIAS, which is below its new Vs of 77KIAS! By reducing the Vmca below the clean stall speed, vortex generators essentially eliminate Vmca in this application.

In addition, the Cessna’s maximum takeoff weight increases by 360 pounds! Talk about increasing your safety margin!

Micro VG’s are approved for use on over 500 different models of airplane. Benefits are immediate and installation takes less than a day.

Chances are they will benefit you as well! Contact Brian in our maintenance department to learn what type of improvements in stall speed and maneuverability you can expect on your specific airplane.